Originally released in March 2008, these FxFactory based plugins are recreations of the old Andy’s Elastic Aspect plugin for Final Cut Pro (Legacy).

Although the much lamented FCP of old has since passed into history, through the magic of FxFactory you can still enjoy many of your favourite old effects in all your fancy modern FxFactory supported hosts … and now Andy’s Elastic Aspect plugin is proud to join the fray.

In this release you’ll find three versions : Classic, Simple and Max. What are they for? Well the basic premise that I wrote back in 2008 hasn’t really changed …

“Your big ass widescreen TV at home has a progressive stretch mode that you can switch on when you’re watching normal 4:3 broadcasts … it makes the picture fill that gloriously wide screen without everything seeming too obviously stretched. So how does that work? It uses a proprietary pixel stretching algorithm to leave the center of the screen relatively undistorted whilst stretching the pixels more and more the nearer they approach the edge of the screen. OK, so how does this plug-in work? Errrm … pretty much the same way …”

“The basic prerequisite for using this effect properly is first to tell your NLE to stretch your otherwise 4:3 clip to fill your 16:9 sequence.”

“Why?” you ask, have I suddenly re-worked and re-released this plugin now? You can go ahead and thank (or blame) GoPro. It turns out that their awesome little camera shoots some of it’s very best images in 4:3 mode … and they and their customers have been some of the most active users of Andy’s Elastic Aspect. Well I happen to think GoPro camera’s are pretty awesome, so when FxFactory hit version 4.0 and introduced host support for Adobe Premiere Pro, I decided it was finally time to check out the developer side of the FxFactory plugin system … I’m glad I did. 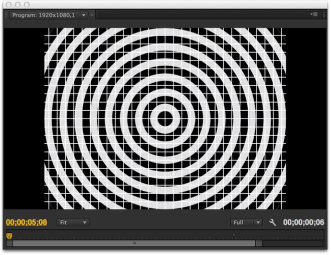 I need to scale my source footage appropriately for my target sequence frame size , as above … select your clip, then go to the Clip menu > Video Options and choose Scale to Frame Size

It may be worth noting that this is a default behaviour option in Premiere Pro … under Preferences > General tab, if you just tick the Default scale to frame size option, then Scale to Frame Size will be pre-enabled on all clips.

2) Modify the clip for anamorphic display 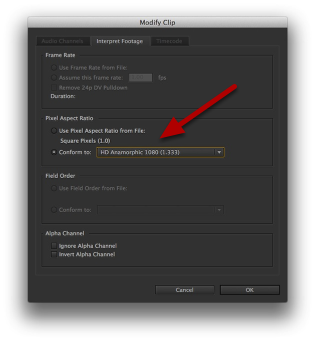 I need to tell Premiere to treat the footage as if it is “Anamorphic” … select your clip, then go to the Clip menu > Modify > Interpret Footage… and set the Pixel Aspect Ratio >> Conform To: property to HD Anamorphic 1080 (1.333)

And there we go, our clip has now been accurately scaled and stretched to fill the frame and is ready for a bit of Elastic Aspect manipulation … so lets grab “Elastic Aspect Classic” from the Effects >> Video Effects >> Andy’s Effects folder and throw it on our newly prepped clip. 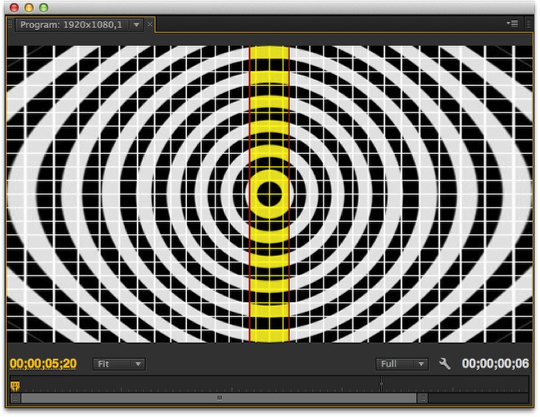 Right off the bat you’re going to see a default correction applied. A narrow center region of the image has been corrected to display in it’s original 4:3 aspect ratio, whilst the areas of the image lying outside of that protected region are gradually stretched to fill the remainder of the 16:9 frame.

Lets take a look at the effect’s controls, and the default settings that produce the above effect.

There are a number of pretty self-explanatory sliders, all of which help to define the display of what I call the “region of protection” ie the area of the image within which the pixel aspect is most fully corrected to display in it’s original aspect.

“Protection Centre” is a slider that varies from -1 to +1 … give it a wiggle and you’ll see that it controls the placement of the region of protection, left (-1) to right (+1).

“Protection Width ” is a slider that varies from 1 to 99 … as it’s name implies, this slider controls the width of the region of protection and is a percentage of the original image width.

“Protection Override” is a slider that varies from 0 to 1 … this control can be used to add a little bit of linear stretch back into the otherwise protected area of the image. A little bit of stretch will likely go unnoticed and will help greatly in reducing any apparent disparity of distortion.

“Tension Tweak” is as slider that varies from -0.20 to +0.20 … this is a new control and is designed to better allow some adjustment in the delicate zone between the region of protection and the region of elasticity. Whistle the plugin is designed to automatically provide a naturally smooth graduation between these areas, on occasions where more dramatic distortions are attempted, this parameter should allow the user better control of that delicate balance.

“Show Protected Region” is a simple on/off switch … to enable / disable the display of an on screen guide to help you better define your region of protection / region of elasticity, and you almost certainly want to remember to switch it off before you render!

So there you go. If you’ve ever used the old Andy’s Elastic Aspect plugin then you should find this new version will be be pretty familiar and hopefully it’ll feel right at home in your effects bin. And if you’re new to the plugin, well then “Welcome!”. Load it up and have a play, it’s all pretty straight forward.

Elastic Aspect Simple is as it’s name suggests … a very much simplified version of the effect, with just two controls, and for most folks this is likely the quickest and easiest version to use :

“Center” provides the same fundamental control as found in Elastic Aspect Classic, that allows you to target the area of the image within which you want the greatest protection / aspect correction.

And “Override” provides a simple control that allows you to increase or decrease the intensity of aspect correction applied to the image.

Open it up and have a play. Consider it a working yet experimental version. It lacks the precise control of the segmented zone version that is “Classic” but at the same time the simplicity of the “Protection Presets” style of controls might be to your liking.

With it there is the default one size fits all setting, plus you are able to choose from a selection of built in presets that offer alternative varying protection zone widths. You have full access to all the controls that I used to create these presets, and you can tweak these and/or create and save your own presets as needed.

• Try loading the “Extra Small” preset then adjust the “Elasticity” control …  as you raise it from 0 to 33 you should see this effectively increases the elasticity of the centre protection region, essentially working as a “protection override”.

• Try loading the Extra Large” preset then adjust the “Mod 1” control … as you back it down from 100 to 33 you should see that this progressively narrows the protected area.

Be careful though as these settings are not hard and fast. Changing one control’s setting directly affects the response from other controls. The “Elasticity” control works uniquely as a protection override when starting with the “Extra Small” preset, just as the “Mod 1” control works uniquely as a protected area width control when starting with the “Extra Large” preset, but only because thats what works with that particular combination of settings. As with the original FCP based Elastic Aspect, it’s entirely possible to distort your image quite horribly using a bad combination of settings.

Ok. Thats it from me. Good luck with the plugins, I hope you find them useful.

All the best
Andy.